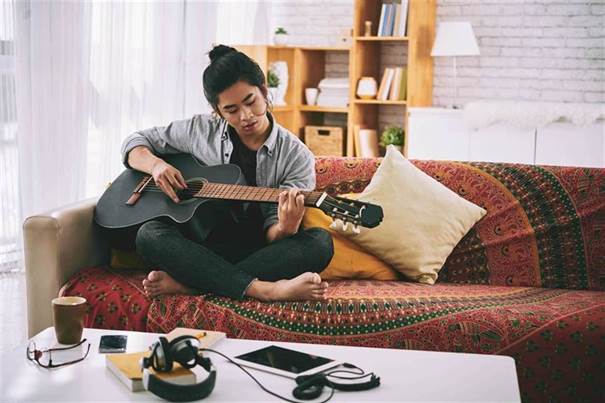 One of the nicest things about the guitar is how easy it is to tune. While our standard tuning is E-A-D-G-B-E, we can use those six tuning pegs to create an astonishing variety of different tunings. These tunings can have a variety of different uses; they might be used to create sounds and chords otherwise practically unavailable, or to help guitarists with weak fretting hands to make beautiful music that might otherwise be impossible for them to create. The ease with which you can shift tunings means you can try any of these tunings right away; play around with them, and see how they feel. When using an acoustic guitar, it’s good to remember that when you change the tuning, it can change the tension in the neck; that means you’ll often have to fiddle with the tuning three or four times before everything settles in the right place. Be careful not to put so much tension in your strings that they break!

A tuning is considered a “drop tuning” when the 6th string is lowered, generally so that it is one octave lower than the 4th string. Drop D is the simplest drop tuning; it involves lowering the 6th string down one full step so that the tuning becomes D-A-D-G-B-E. Drop tunings are particularly useful for quick transitions between power chords, and are thus commonly used by metal and hard rock bands, including System of a Down, Children of Bodom, and Rage Against the Machine. Drop tunings also make arpeggiated chords a bit easier, and bands like Radiohead and the Beatles have used drop tunings for this effect.

Open tunings are any tuning that, when all the strings are played open (without fingers on any frets), creates a chord. These tunings are particularly useful for slide guitar, with an open tuning, you can slide from fret to fret and pretty much always have it sound good after doing a bit of experimentation. When you want to riff along with Seven Nation Army by The White Stripes, Open A tuning (E-A-C♯-E-A-E) is the tuning for you; when you play it, you get an A chord. You can basically create any chord using open tunings, even really odd ones; figure out what the constituent notes of the chord are, and tune your guitar so that every string, played open, creates the chord.

There’s a lot of other really weird ways of tuning your guitar. Ostrich tuning, pioneered in part by Lou Reed of The Velvet Underground, assigns one note to every string; E-E-e-e-e-e, for example. Playing with tunings is a fantastic way of creating new chord progressions and styles to play in; it’s a lot of fun, and I can’t recommend it enough. Don’t just take my word for it, though; Joni Mitchell famously used alternate tunings for many over her songs; over 50, by one count! For more great advice on varying and improving your playing, there are in-home Winnipeg guitar lessons.