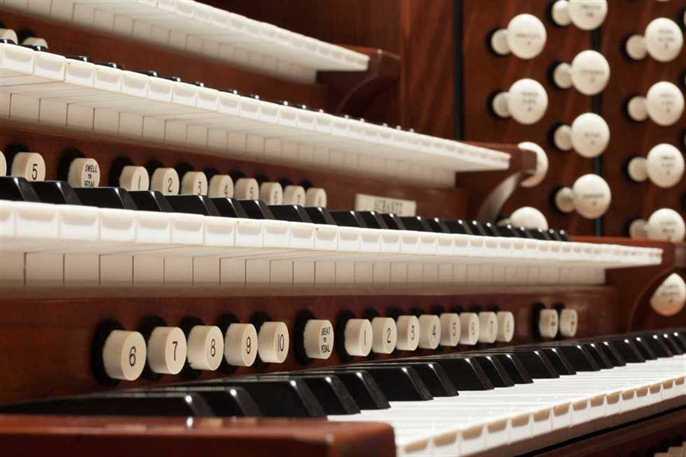 At first glance, an organ and a piano may not seem that different. But once an organist or pianist sits down to play, they’ll notice that the type of music these instruments produce is quite unique. What’s the difference between a piano and an organ? Is an organ just a piano with 2 or 3 extra keyboards? Not exactly. These instruments sound different, have varying mechanisms to produce their tones, and require distinct training to play.

Even though both the piano and the organ have keys, the way that they each produce sound is unique. The instruments are classified as two different types; acoustic pianos are percussion instruments, while the pipe organ is considered a woodwind. This is because pianos use a hammer to hit strings. The sweet melodies of a piano are produced by that hammer; when it strikes, the strings vibrate. Pedals are used to sustain the vibration so that the note continues. The tightness and length of the strings affects the pitch of the note that’s produced. Each key is made up of 2 or 3 strings which vibrate to produce a note.

Pipe organs, on the other hand, use a system of air that moves through its pipes; they have no strings. The keys and pedals control how much pressure and air flows through the pipes. When a key is pressed, the pressure of the air changes to match the desired pitch. The stops of the pipes are what determines the tone of the note. For example, an organ may have flute or trumpet stops; each one produces the corresponding sound. Unlike a piano, the notes of an organ key will be sustained indefinitely until the player lifts their finger.

With both pianos and organs, there are digital and electronic variations. A digital piano is easier to maintain than an acoustic piano and is fuelled by electricity. There are several distinct types of organs that use different mechanisms to create sound. Digital organs are affordable, just like digital pianos, and they both use pre-recorded sounds.

There is a difference in the type of sound and volume levels between these two instruments. The pedals that players depress with their feet have different functions on organs and pianos. A pipe organist uses pedals to control the opening and closing of pipes, which alters the sounds they create. Acoustic pianos can only sound like one instrument: a piano. But due to the organ’s unique system of pipes and airflow, the sound of this instrument can change significantly. Piano pedals are typically used to sustain one note or a series of notes.

One of the most obvious differences between these instruments is the arrangement of the keys. While pianos have just one set of 88 keys, organs have 2 or 3 levels. Sometimes, they have up to 5! It varies based on how many octaves the instrument has. The keys of a piano are long and resistant, while those of an organ are shorter, narrower, and more responsive to a light touch. It will not change the tone of a note if an organist strikes the key softly or firmly, but the inverse is true for a piano. The harder the pianist strikes a key, the harder the hammer will hit the strings. A grand piano creates loud music, but it can’t compare to a pipe organ; these woodwind instruments were designed to fill a big church with music and are quite loud as a result.

Pipe organs and acoustic pianos both require semi-annual tuning to maintain the right tones and pitch. Tuning forks used to be used for this task, but now most tuning professionals use digital tuners. During a pipe organ tuning, the pipes are tightened and adjusted to match a desired tone. With an acoustic piano, the strings and tuning pins are tightened. Neither will need tuning if they are electric.

The environment of the instruments will have an impact on the sound they produce. As acoustic pianos are made mostly of wood, they are subject to changes in humidity; a room that’s too damp or too dry can lead to issues with the instrument’s mechanisms. On the other hand, the pitch of an organ’s pipes is affected by both humidity and the temperature of the room.

A new pipe organ can cost $200,000, and some models are worth millions of dollars. There are, however, several types of smaller, less complex organs on the market that are quite affordable. Just like pianos, their cost range is due to their quality and type.

Hopefully, you now have a clearer idea of how pianos and organs are distinct from one another. It may have inspired you to start learning one of these complex instruments. But you may find it easier to start playing the organ if you learn how to play the piano first. At Academy of Music, we sell pianos of all kinds, including grand, upright, and digital pianos. View other types of pianos.