Online and In Home

Fill out the form below to get started:

We offer in-home flute lessons. We do this because we understand how difficult it can be to travel to music lessons, and because children (and many adults) tend to learn better in a setting in which they are comfortable. Our in-home lessons mean you can listen to your child’s progress without feeling like you’re disrupting them. Our instructors are more than happy to teach a wide variety of musical styles, and their techniques constantly compound on what has been learned before, so your technique will develop in a gradual, consistent way. We use the Hal Leonard Essential Elements for Band lesson plan, which uses a variety of media in order to teach music theory, technique and more; you’ll quickly learn to play with the band! We also offer Royal Conservatory of Music lessons; passing the Royal Conservatory exam is an essential rite-of-passage for any aspiring professional musician. Finally, our courses can be tailor made for you; our instructors can personalize a program of study that best suits the needs of the student, whether it is to get a head start with a school band program, to reinforce and supplement a current school band program, to prepare for a university music program or just for fun! The winds of change are blowing, and the notes they make are beautiful; pick up the flute and play along.

Flutes are one of the most diverse and historically significant categories of instruments you can find. Some of the first carvings known to man are flutes, the first of them having been created 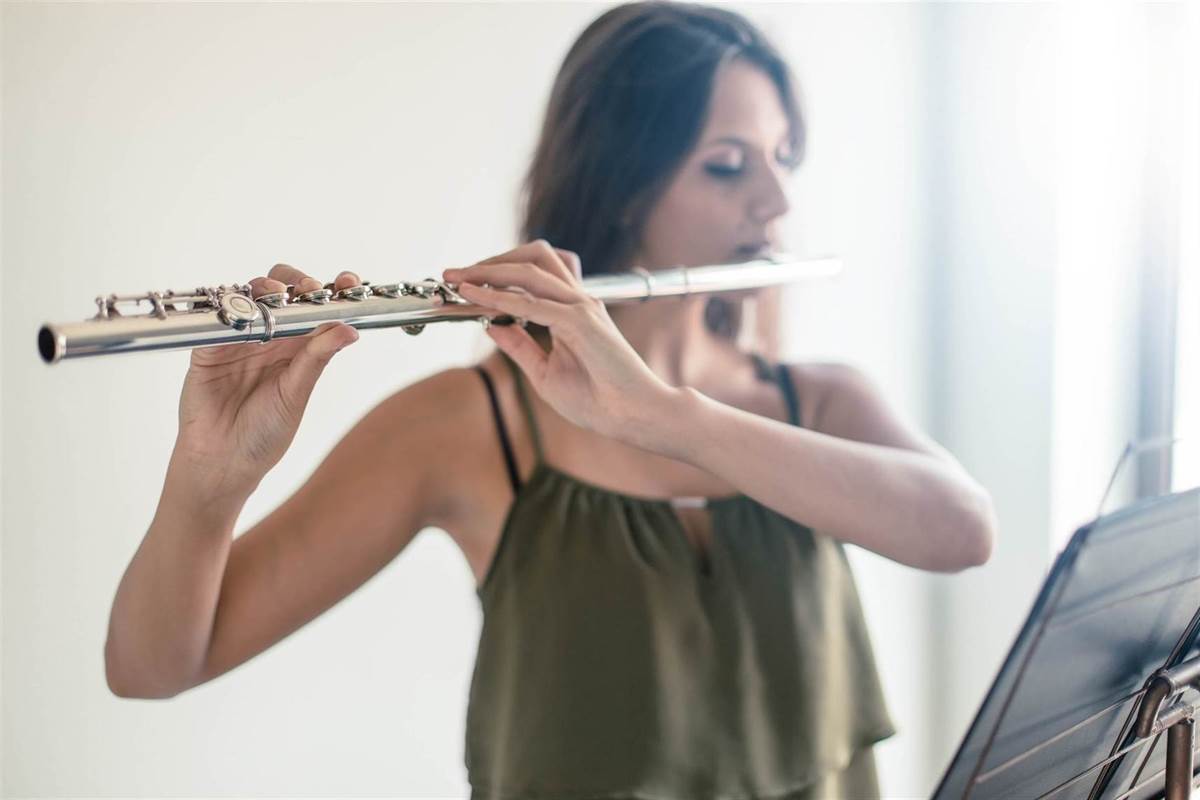 anywhere from 35000 to 42000 years ago. In their most basic form, flutes are simply open tubes which are blown into; over time, players learn to focus the air-direction and force of their blowing in order to produce different sounds. All flutes are variations on this simple concept, but the variety found within the category “flute” is truly exceptional.

The most well-known flutes may well be the Western classical concert flute; these are so commonly used most folks in North America simply call them “flutes”. Western concert flutes are in the category of “transverse flute”; these flutes are held horizontally, and the flutist (or flautist) blows across the embouchure hole, placing their fingers on tone holes, of which there are typically 16, in order to vary the pitch. Changes to the quality of their blowing, either in direction or intensity, can also vary the timbre, pitch and dynamics of the music the flutist plays.

Another commonly known flute is the recorder, much to the chagrin of some parents of elementary school children. The recorder gets a bad rap because of this; with sufficient musical training and a high-quality instrument, beautiful music can be made with a recorder. The recorder is part of a category of flute known as “internal duct flutes”; these flutes have fipples, whistle-like heads which are loosely sealed using the lips, unlike transverse flutes which are blown over. There are a variety of internal duct flutes that aren’t recorders; ocarinas are one example of this. Ocarinas are also vessel flutes, a category of flute that is not a cylindrical tube (crudely, blowing over an empty bottle is a type of vessel flute).

There are so many other categories of flutes, it’s almost impossible to get into them all. There are end-hole flutes, probably one of the most basic types, where the flute is held at an angle near the player’s vertical axis; these flutes are particularly popular in Middle Eastern and Mediterranean cultures. There are nose flutes, a type of end flute where the air that provides the sound is creating by exhaling through the nose, rather than from the mouth. You might even consider the pipe organ a gigantic, complex type of flute, as pressurized air is sent through the pipes in order to create notes.

All of these categories bring us to a simple truth: if there’s a kind of music you want to play, there’s a flute for you. For now, let’s focus on the music you can learn with the most popular category of flute, the Western concert flute. The most common use for the instrument is in classical music, where entire flute concertos have been created; there are classical songs composed for solo flautists, flutes and other instruments, and entire orchestras featuring several flautists. There’s a great history of flutes being used in more recent, popular Western compositions as well.

Flutes weren’t commonly used in the first jazz compositions, but by the 1930s some composers were adding flutes to their arrangements. This became more popular in the 1950s, and avant-jazz and modal jazz composers began to find the instrument provided new depth to their instrumentation. Flutes are also seen in rock more commonly than some realize; this was especially true of the progressive rock scene in the 1970s. Infamously, Jethro Tull, a band whose songs prominently feature the flute, one the Grammy Award for Best Hard Rock/Metal Performance in 1989, beating out Metallica for the award; many were surprised, as Jethro Tull weren’t generally considered hard rock or metal. Jethro Tull responded by putting a cheeky advertisement in a British music magazine; a picture of a flute laid atop iron bars with the caption “The flute is a heavy, metal instrument”. 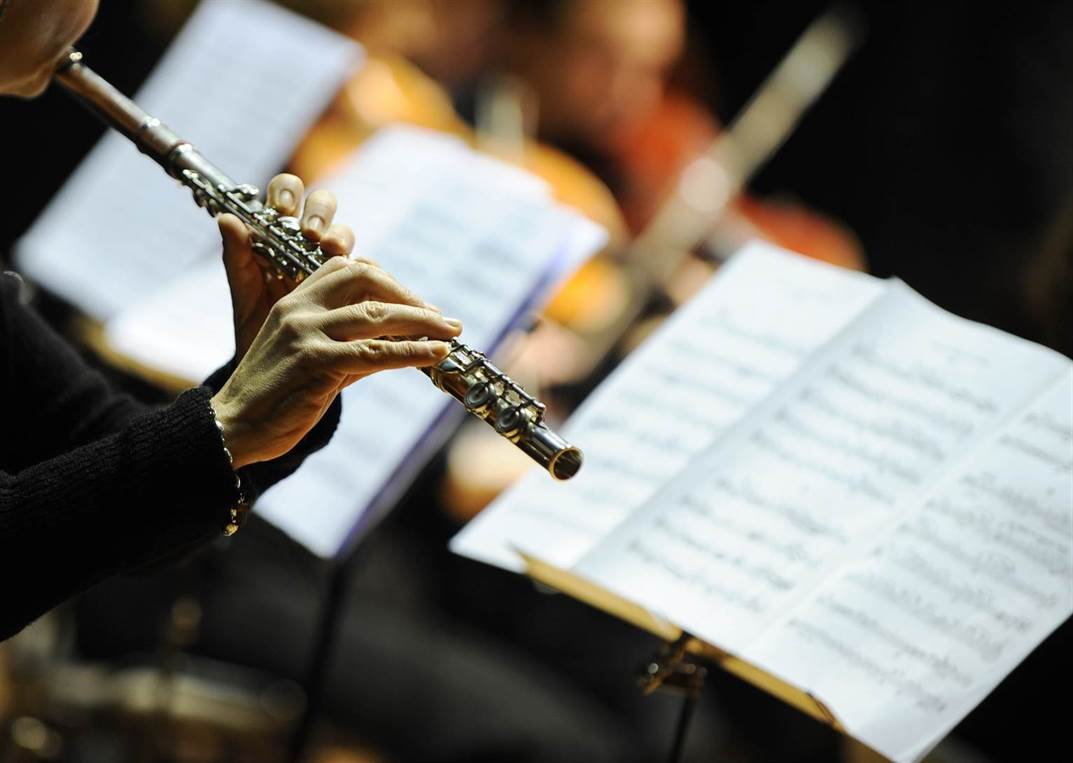 First, you’re going to learn to play beautiful music with an instrument that is underutilized. You surely know guitar players or pianists, but you probably don’t know too many flutists; learning an instrument that’s high in demand but low in supply ensures you’ll have a spot if you’re looking to play with a group. When you learn to play an instrument, you learn about yourself; everyone plays a little differently, and it’s those idiosyncrasies that you can make into something special when you learn to play. You’ll also learn about your own body; to play the flute properly, you have to regulate the air coming in and out of you perfectly, so you’ll develop the very way you breathe. You’ll learn to move your hands dexterously from tone hole to tone hole, creating incredible music as you go along. This all takes patience, practice and dedication; skills that will help you throughout your whole life, not just your flute lessons. This, in turn, builds confidence, and that confidence will carry you through more than you can imagine.

All of these benefits apply to children, too; even more so, because neuroplasticity is at a high in childhood, so the impact of confidence and patience building exercise is stronger. The tools learned in their flute lessons will serve them throughout the rest of their lives, and they’ll have an incredible talent to move people by turning their own personal experiences into music.